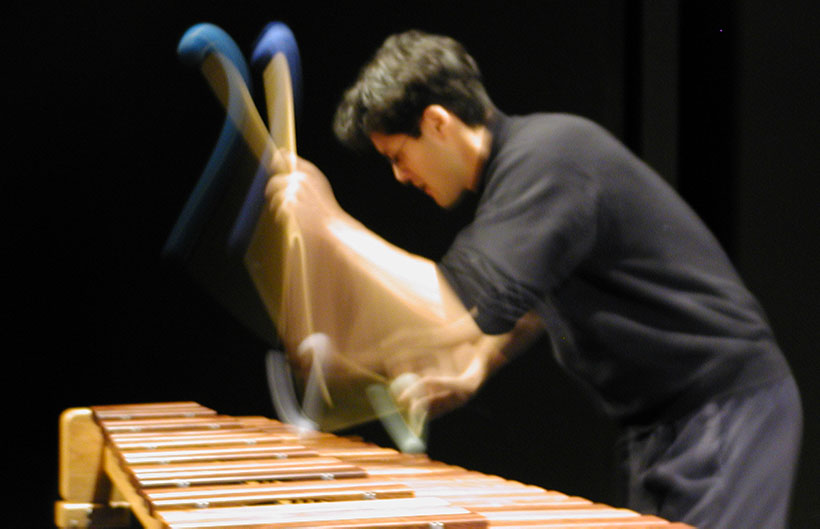 When Froh struck the keyboard with four mallets and simultaneously played the bass drum with his foot, it was clear that only an octopus could handle the opus better.

Percussionist Christopher Froh specializes in promoting and influencing the creation of new music through critically-acclaimed performances and dynamic lectures. To date, he has premiered over 150 chamber and solo works by composers from 17 countries. His collaborations include some of the most significant composers of the 20th and 21st centuries including Chaya Czernowin, David Lang, Steve Mackey, John Adams, George Crumb, Liza Lim, Matthias Pintcher, and Keiko Abe. Froh has also worked extensively realizing percussion scores of player piano and fixed-media pieces by Conlon Nancarrow, a project that culminated in a solo recital at the Whitney Museum in New York City and featured solo performances with the Chamber Music Society of Lincoln Center at Alice Tully Hall.

Froh’s performances have garnered exceptional critical praise. The New York Times heralded his interpretations of modern repertoire as “entrancing,” “alluring,” and “vividly wrought.” The Chicago Tribune has praised his “unfailing virtuosity,” while the San Francisco Chronicle described his performances as “tremendous” and “fierce and uncompromising.” The San Francisco Classical Voice writes of his playing, “Percussionist Christopher Froh has been an invaluable presence in the Bay Area for over a decade, enlivening the contemporary music scene with performances of exceptional musicality and virtuosity.”

Froh has performed works for solo percussion at venues around the world including Alice Tully Hall at Lincoln Center, the American Academy in Rome, The Beijing Modern Music Festival, The Harris Theater in Chicago, the Hagia Irene in Istanbul, the Kennedy Center, and concert halls throughout Japan. He has been featured with leading voices in chamber music including Yo-Yo Ma and the Silk Road Ensemble, the Chamber Music Society of Lincoln Center, Music at Menlo, and the St. Paul Chamber Orchestra. As an orchestral musician, he has performed with the National Symphony Orchestra, the Honolulu Symphony, and the San Francisco Symphony at Carnegie Hall.

Strongly committed to developing diverse and under-represented voices in the performing arts, Froh has created visionary outreach programs targeting underserved communities. His workshops, lectures, and classes have shared the immediacy and relevance of music with homeless and housing-insecure populations, children of migrant farmworkers, and at-risk youth. Froh is a faculty member at the University of California at Davis and California State University at Sacramento where he teaches percussion and chamber music.